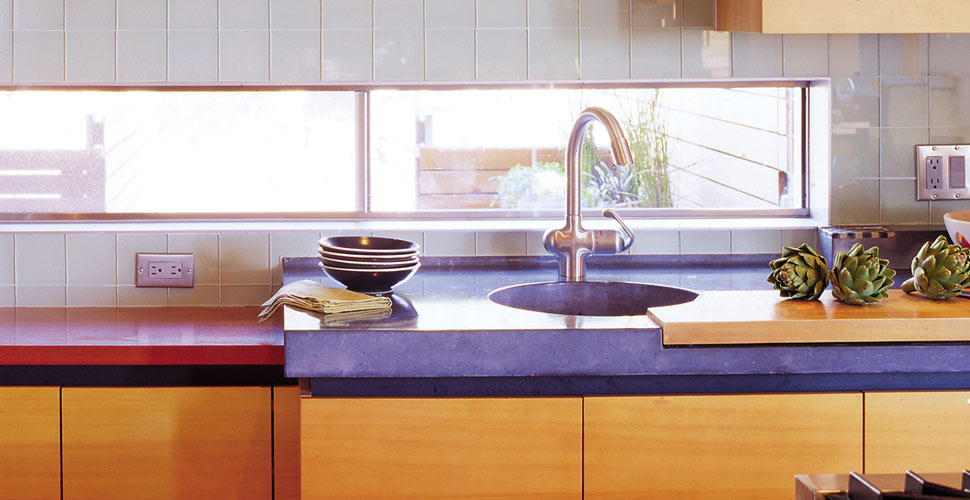 One Material Has You Covered From Traditional to Modern

Quick Tour of Concrete
Concrete has been used for centuries to form all sorts of structures and surfaces. Most people think of it as an exterior material for large bridges or skyscrapers, public sidewalks or roads. In fact, concrete has extensively been used as a decorative and structural material in architecture and building in our recent past. During the 1920s and 1930s, concrete expressed all the sculptural functions for which stone was traditionally used. It was an inexpensive substitute for granite and marble. Elaborate molds were made to cast columns, capitals, balustrades, and neo-classical facade details for the exterior.

Extensive interior applications of concrete included floors (Terrazzo, acid-washed, and smooth-troweled) and fireplaces. In fact, a walk around Berkeley, California (where Cheng Design is located) turns up a variety of concrete examples or settings that might otherwise be called “traditional.” At UC Berkeley’s Edward Track and Field stadium, the walls are formed tableaus of classical details with a “moderne” touch. Bernard Maybeck’s renowned Church of Christ Scientist (1910) is not only a great example of the Arts and Crafts movement in architecture, but also features exposed concrete walls, beams, columns and cladding with exquisite detail evocative of the Beaux-Arts tradition with a truly modern touch for the time.

During the 1950s and 1960s, with the advent of Modernism, less decorative detail in architectural styling meant less use of concrete for that purpose. Soon it was used strictly for its practical, structural value. “Form follows function” was the rallying cry of the brave, new architects as a reaction, in part, to the wedding cake architecture of neo-classicism. Developers were only too happy to oblige as the lack of craftsmanship meant less skilled labor and that, of course, meant more profit margin. You could say “boredom followed function” after the minimalist purity of the original creative intent exhausted itself by the 1970s.

Today, we are clearly in the beginnings of a renaissance of expression and creativity in concrete. Tools are now available to the public (professional and amateur) that were once the prerogative of the specialists. The potential for creative expression in concrete are boundless with these tools. With a little attention to detail, concrete—that infinitely pliable material—can take on any look you care to give it. Acid washes, stamping tools, poly-urethane molding material, diamond pads, soft cut blades, diamond floor polishers, rapid-set concretes, water reducers—all have made the task not only easy, but fun.

Concrete’s use in kitchens and bathrooms may still be considered relatively “modern” design-wise by the standard homeowner. But while concrete can be used to create a modern or minimal look, it’s also perfectly adaptable to a more traditional setting—where it was so extensively used in the first place. In truth, there are no standard guidelines that, if followed, will guarantee you’ll get a certain look. All “styles” are really just an amalgamation of details that evoke a certain feeling when used together.

For example, combine a stone hearth, shuttered windows, and dried herbs hanging from the kitchen ceiling and you might think of a home in Provence, France, even though each of these elements also show up in plenty of other styles. Pair glass cabinets with white porcelain fixtures and you might think you’re in a San Francisco Victorian—or take away ornamentation all together and you might end up with something more Shaker. Thinking of style as an assortment of possibilities rather than as a prescription or recipe is actually quite freeing, and it’s suddenly much easier to understand how concrete might fit in just about anywhere!

Concrete can act as a substitute for more traditional materials. Rather than just using concrete to explicitly re-create something from the past, you can also combine it with other elements to suggest a timeless quality. In my work at Cheng Design, I always strive to strike a balance between innovation and emotion, between spare contemporary and warm traditional. Adding mosaic tile along the front edge of a concrete surface, inlaying bits of tile along a back splash, or even embedding a fossil in a countertop all connect us to the past.

Making kitchen countertops means working with the style of the kitchen. Ninety percent of the kitchens in the United States are some form of traditional or quasi-traditional design. If you wish to start a business crafting counters, or you want something special for your own home, it is crucial to have an understanding of traditional styles and their origins. Looking at styles means more than simply grabbing a particular detail and force-feeding it into a new setting, or environment.

The style that we associate with a particular era evolved from the function, art, craft, and technology of that time. They were appropriate for their time. I have seen, for example, where Corinthian columns were plastered to the end panel of an island cabinet simply to evoke the idea of “classical.” There was no rhyme nor reason, no use or function, for them except to convince us that it was a traditional kitchen. This is a type of design I call “Wedding Cake” or “Costume” design. It is a kind of design that is the opposite of “timeless,” for it serves as only a nostalgic reference to the past.

So how does a conscientious craftsperson, designer, or fabricator overcome the timeless and traditional contradiction?

It takes a sense of design and a sense of balance and restraint. I have designed a few kitchens that are “traditional,” or more precisely, that convey a feeling of a traditional style. Yet, a closer look will reveal that if just a few materials were changed (concrete counters for tile counters) and the treatment of the cabinet doors simplified (flat panels of natural bamboo instead of raised panels), a kitchen could easily morph into a “contemporary style” (see Figures 1-3). In this particular case, the design “bones,” or layout of shapes, is what makes this kitchen work practically and aesthetically across all styles. Conversely, I could have easily cast the same edge detail (in the current counter’s tile trim) in concrete countertops with a white cement and thicken the edge up a bit as well. Doing this would make the kitchen fit very well into the “traditional” camp.

A California cottage we renovated recently moved from “traditional” to “transitional” (see Figures 4 and 5). A large concrete curved wall/counter boldly separates the living room from the kitchen. Meanwhile, a stainless steel integral sink countertop straddles one wall—yet, by inlaying glass tiles into the back splash and inserting a traditional plate holder in the cabinetry, enough balance is achieved to avoid a conflict of styles.

Lets take a turn-of-century “Craftsman” style kitchen for a hypothetical example. The cabinets would most likely be frame-and-panel with flush inlay door frames. There would be wood wainscoting in the dining area and perhaps tile around a single porcelain sink. The lighting fixtures might have beveled glass or echoes of Tiffany lamps. What concrete application would be appropriate in this situation? I would look into one or more of the following ideas in combination:

Now I wouldn’t want to use all of the above accents—just enough to carry a complementary flavor to the Craftsman look and feel. The concrete itself is earthy enough to carry that load. It’s up to you as a homeowner or designer to add the touch that personalizes and enhances the piece. In some cases, for instance, the overwrought “traditional English manor” kitchen, usually full of elaborate detailing, can use a touch of restraint—the concrete counter with a simple ogee edge detail and a complementary white porcelain farm sink might just be perfect.

As they say, it’s all in the details.