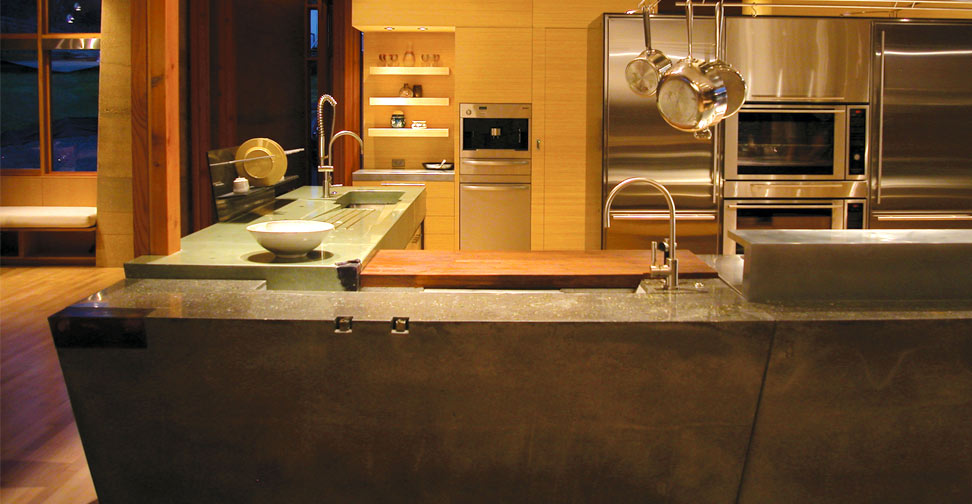 Today’s kitchens seem to have everything except beds. “People are spending more time in kitchens,” says Paul Ryan, host of “Kitchen Renovations,” which airs at 10 p.m. Wednesdays on the DIY Network. “Kitchens years ago used to be white walls and three appliances and a counter.” Today’s kitchens are a destination rather than a stop on the way to the dining room. Many feature comforts typically found in a living room or den, which help create an inviting environment where hosts can entertain their guests.

“A lot of the time, the hosts are in the kitchen preparing food and the guests migrate into the kitchen,” Ryan says. Just such a migration occurred five years ago when Sue and Henry Cibula remodeled the kitchen of their Franklin Park home. They bought custom cabinets and granite countertops, along with a professional grade Sub-Zero refrigerator and twin ovens from Thermador, a high-end appliance manufacturer. The design included custom tiles bought in Mexico. Now, jokes Sue Cibula, “All the family parties are at my house.”

Designers, architects and manufacturers have been merging aesthetics with functionality. The primary trend of today’s kitchens? “Integration,” says Craig Scheimer, who co-owns Dormont Appliance Centers with his brother, Alan. One section of their Dormont showroom features high-end refrigerators, stoves and ovens by Sub-Zero, Viking, Wolf and General Electric’s Monogram line. With motion-sensitive control panels, separate climate-controlled compartments and expanded cooking capabilities, these beauties seem to have everything except a remote.

But instead of the expected stainless steel or enamel surfaces, they’re almost all camouflaged behind wooden cabinets. Husbands like the electronics, says Scheimer, while wives often want it all hidden. “We’ve seen two types of consumers,” Scheimer says. “One is the serious cook. They’re interested in performance first and style second. The other kind wants to fill out the kitchen to make them look like the rest of the home.” The serious foodie now has a range of options. High-end stoves can deliver high heat quickly for searing a steak but also deliver low heat at a more controlled, even rate. Some ovens allow you to cook shrimp scampi on one rack, with bacon in the middle and chocolate chip cookies below, without the flavors co-mingling. Most also have convection features, powered by twin fans at the back, that distribute heat more evenly. These are professional-grade models, however.

Your lifestyle often determines what kind of appliances you’ll need, Scheimer says. “Do you have a young family? Do you have a lot of kids? Do you entertain a lot?” CopperLeaf Kitchen & Bath Design in Pine has a questionnaire on its Web site, www.copperleafdesign.com, that pose these and other questions to help people decide how much kitchen they want. Considerations include the number of family members, whether the family includes young children, where the family eats its meals, who are the primary and secondary cooks, and how long they plan to live in the home.

Among the appliances CopperLeaf Kitchen & Bath Design sells is a dishwasher manufactured by Fisher & Paykel that is concealed by a drawer. A twin model is also available. “They run independently of each other. You could basically never unload your dishwasher again,” says designer Patty Beatty, manager of the kitchen and baths divisions. “You have one clean and one dirty.”

HGTV is focusing on the renewed interest in kitchens with its “Kitchen Trends 2005,” which airs at 9 p.m. Mondays. One episode, “Countertop Options,” explores the range of countertop surfaces, including quartz, translucent glass and a stone called travertine. Frank Boyd, president of Style-Rite Kitchens in New Kensington and Zelienople, says many people are paying more for countertops. “The largest change I’ve seen in the last couple years is that people are upgrading their countertops, and instead of spending hundreds they’re spending thousands,” he says. “Instead of spending $400 they’re spending $4,000.”

Granite and quartz are popular choices. “They’re virtually indestructible,” Boyd says. Granite and quartz also cost about 10 times more per square foot than laminated countertops, he says. Another up-and-coming decorator surface: concrete. California designer Fu-Tung Cheng, whose kitchen designs have been featured on HGTV, is the author of Concrete at Home, which discusses the versatility and beauty of concrete as a finished material. “It’s a very practical material to be creative with,” Cheng says. “You can do all your creation in the molding work. That means you can tool the mold … you can inlay mosaics. You can inlay tile, you can inlay slate, you can inlay granite.”

But those thinking about remodeling their kitchens shouldn’t feel intimidated, says Audria Craven, manager of Kitchen & Bath Galleria by McBrooms in Latrobe. “It’s not about me designing a kitchen for you that I want you to have,” she says. “It’s about me helping you get the kitchen that you want — functional, safe and aesthetically pleasing.” Boyd says more people are spending money on kitchens to create rooms where the entire family can relax. “The population in general cocoons more, and the kitchen is a central meeting point, so they try to make it extra nice,” he says.

Integration: Dishwashers and refrigerators are built into the walls and concealed by cabinetry, while the kitchen itself is integrated into adjacent dining or living room areas.

TV or computer stations: One design option is a built-in, fold-out cabinet with a miniature home entertainment system, featuring a television, computer and radio. CMi Worldwide manufactures a device called the iCEBOX. The portable 12.75- by 11-inch device includes cable-ready TV and Internet access, a CD and DVD player, and washable keyboard and remote control. The Icebox can sit on the counter or be hidden.

Mood lighting: Under cabinet lighting and dimmers often are incorporated into the design. “Lighting has come so far, as far as kitchens go,” says Paul Ryan, host of “Kitchen Renovations” on the DIY Network. “It used to be one fluorescent light in the center.”

Blueprint, blueprint, blueprint: “If you don’t plan a specific blueprint diagram, inch by inch, foot by foot, it’s going to come back and bite you,” says DIY’s Ryan. When calculating space requirements, don’t simply rely on specs from the company that makes the cabinets or the appliances, he says. “Your opening could be an inch too short or an inch too wide.”

Family first: If you have two teenagers that you have to shuttle to soccer practice and dance class, perhaps you’ll need that convection oven that cooks food quickly. But if you eat out a lot, ask yourself whether you’ll really need that professional-grade, six-burner stove with dual-stacked burners that go from a low simmer to 15,000 BTUs.

Collect photos: Create a file of magazine photos of kitchens you like, says Audria Craven, manager of Kitchen & Bath Galleria by McBrooms in Latrobe.