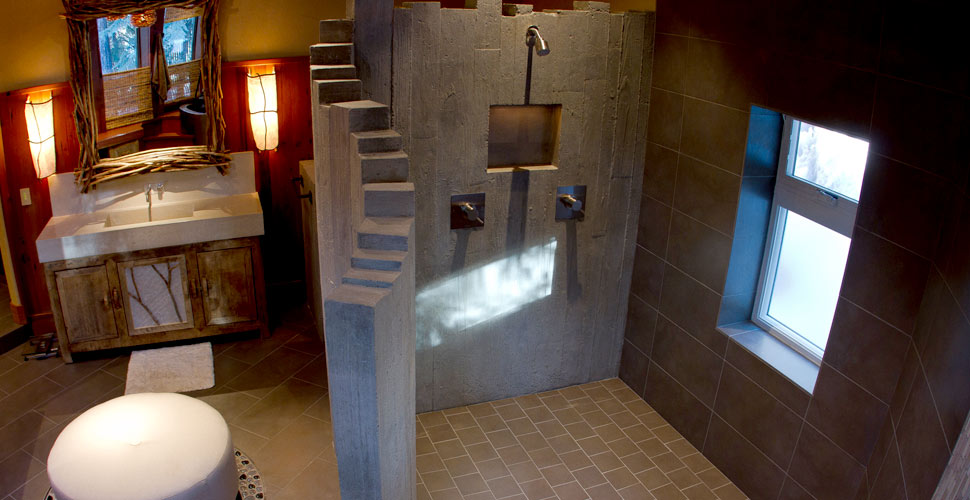 Q: What are some suggestions for building a concrete wall in a shower and how can I achieve a smooth curved piece?

Building a concrete bathroom shower can be a tremendously creative endeavor, especially when you have ample space at hand. However, as mentioned in my article Bathrooms: Going Beyond Countertops and Into the Shower, concrete has its limitations when exposed to water, so you need to carefully plan which concrete elements to cast in a shower.

The largest concrete shower wall we’ve ever built was a blue-toned, elliptical wall surround eight feet long, five feet wide and nearly eight feet high. The shower head was installed in the center of the surround, directly from the top, and a skylight was placed above. This combination created the soothing sensation of bathing in both water and light, while the layered, multi-tonal blue walls evoked the impression of being submerged in water. At the same time, the curved shape of the walls mimicked the look and feel of a natural aquatic environment rather than the boxy feel of a fish tank.

The shower entrance was built at an angle, to open up the entryway and create visual interest. To further accentuate the visual appeal, we added a long and narrow decorative tile inlay running vertically down the apex of the two walls. The inlay also doubles as a wall niche that can be used for holding several glass shelves for toiletries. The shower floor was completely covered with mosaic tile – which was initially supposed to coat the lower part of the shower surround, too. However, when we de-molded the walls, the surface turned out so smooth and appealing on its own, that we decided to no longer cover it with tile.

Due to the large dimensions and the asymmetric shape of the wall surround, we poured it in two lifts. When you make a curved concrete wall and use a smooth plastic laminate as a finish liner, it is important that you build the vertical wall forms out of a very pliable-yet-strong material like masonite rather than kerfing plywood. If you use the extremely bendable “wiggle board” to create a tighter curved shape, be careful to reinforce with either wire reinforced plaster, kerfed plywood, or extra layers of laminate. It is not an exact science as to what material works best in all circumstances. Kerfed plywood — with simple vertical studs for support — can develop facets, which are straight vertical surfaces that show up as ghosting on the final piece. This is what actually happened in our case — even though the eye can’t pick it up, the flash of the camera revealed the faceted effect on the curved wall. A powerful bathroom light (especially if hitting the shower walls full-frontal) would accentuate this effect even more — so keep in mind to choose the right materials for your mold if you’re striving to achieve perfect smoothness in your final piece.

The concrete mix design was ProFormula (Ocean, Tahoe, and added Ultra Marine base pigment) with 5000 psi sacked concrete. For reinforcement, we used both 3/8 rebar and expanded wire mesh. Two lifts were required to ensure good consolidation. A ½” reveal was formed in the joint of the forms to emphasize the line rather than try to hide it. I suggest keeping lifts to a maximum of 4′ to get the smoothest, most bug-free walls.