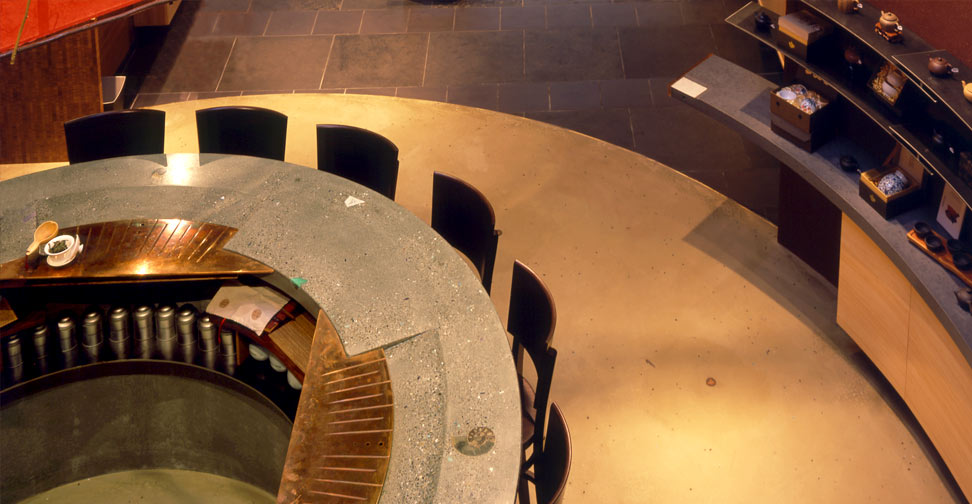 First, a story that sounds like a fable.
When he was 7, Fu-Tung Cheng’s mother led him and his four older brothers to a bank along the Los Angeles River. Each boy carried an empty rice sack. Fu-Tung led the way with a flashlight.

They filled the sacks with sand. Later, they went to Redondo Beach and gathered pebbles. They returned to their farmhouse in Van Nuys. And their mother mixed a batch of concrete. Poured the family driveway. It was a recipe of rare ambition with pie-crust results.

Cheng, a former painter, a tai chi master who once studied Buddhism in Japan, approaches space as though guided by the principles of the tea ceremony.

His elements are sky, water, wind – and concrete. Particularly concrete.

Not the rocky rubble of street curbs or cinder blocks or freeway pillars. No, his use of concrete is more fluid, protean, poured into forms to make sinks, vessels, countertops, patios, fireplace hearths, water treatments, the receptive medium typically stained, etched, stamped or embedded with precious stones or fossils.

The results are organic. And sculptural.

Forgoing a chisel for a trowel, Cheng is a kind of Renaissance sculptor who has made lowly concrete his Carrara marble.

“We tend to think of concrete as something cold and abrasive,” he postulates. “But good design transforms it. Good design makes the material compelling and warm – it shows us possibility.”

Cheng Design occupies a grim storefront next door to a tattoo parlor on San Pablo Avenue in Berkeley. He sits at a conference table made of concrete, its surface embedded with transmission gaskets.

He pours a visitor a cup of green tea.

Fu-Tung Cheng is 58 years old. He is tall, 5-foot-11, thin, with stylish clothes, a professorial man, black hair laced with silver. His personality is an agreeable feng-shui arrangement of charm, humor, thoughtfulness and artful self-promotion.

He is endlessly digressive. A conversation about storage easily leads into a reflection on Lao-tze, the dialectic of consumption and resources, tapping the energy force “qi,” the use of “green” materials.

Cheng has been the accommodating subject of numerous magazine spreads. As though he were ushering in some new epoch, a recent profile on Cheng in the Los Angeles Times was titled “The Post-Granite Age.” He laughs at such presumption. “I have nothing against granite,” he assures. “I think it’s a wonderful material.”

Still, it’s not concrete. He has also been dubbed, in various renditions, the “King of Concrete,” a millstone of a crown that he finds cumbersome.

In 2002, Cheng published his influential “Concrete Countertops” (Taunton Press; $29.95; 208 pages), which launched a small counter revolution in the design industry. Guys who were used to pouring driveways were now trying their hands at forming curvaceous lavatories, in celadon colors, with starfish impregnations.

Now Cheng (with Eric Olsen) has expanded on those seminal concrete principles with the recent release of “Concrete at Home” (Taunton Press; $32; 224 pages). Here, following the examples of such luminaries as Frank Lloyd Wright and Bernard Maybeck, he shows how concrete can be used imaginatively in floors, walls, columns, patios and mantelpieces.

Ostensibly a do-it-yourself book with advisories and design tips, the sensible reader probably will not try this at home. Is there anything more harrowing than a cement truck ready to disgorge 4 cubic yards of fresh concrete at your doorstep?

Best let the professionals do the job.

Cheng agrees. “I’m just trying to expand on the possibilities of concrete,” he says. “So the homeowner will be informed. So they can see just how creative concrete can be.”

In the right hands, concrete is a wonderful, malleable material. But it also has character flaws. A recent issue of Consumer Reports, in rating countertop options (marble, Corian, granite, etc.) ranks concrete highest for its “customization.” But it’s near the bottom for its porosity, chipping and staining.

Cheng counters that he has developed new products that better seal and polish the material, offsetting many of its liabilities. (For more information on Fu-Tung Cheng, his design services, product lines and philosophy: www.chengdesign.com.)

Cheng may be a darling of Bay Area design. But in the Sacramento area, where granite is king and houses often resemble ersatz Tuscan-Tudor-Versailles villas on steroids, there are gray reservations. Leading local designers such as Bruce Benning, Mary Ann Downey and Ernie Sanchez report that they seldom use concrete.

“Maybe my clients are more conservative,” says Downey. “People just don’t want maintenance issues. And with concrete, there are just too many ifs, ands and buts.”

Adds Benning: “The truth is, when it comes to countertops, I would go with honed stone. God made it, not man. Pricewise, it’s comparable.” (Depending on your contractor and intricacy of design, concrete can run from $55 to $100 a square foot.)

Though Benning finds fault with concrete, his praise for Cheng is lavish, unequivocal. “He is a fabulous designer,” says Benning. “Meticulous detail. Absolutely top-notch.”

One couple in the Sacramento area summoned the courage to become willing devotees of Fu-Tung Cheng.

Meet John and Polly Marion. She is 71; he is 83. Both are artists, as bold and lively as can be. The two are retired schoolteachers from Palo Alto. Seven years ago, they moved into an apartment in the University Retirement Center in Davis. As is the case with these complexes, their unit was beige, bland, generic.

But not for long. Seeing Cheng’s work in Sunset magazine, the couple contacted his firm. And essentially gave Cheng carte blanche to gut and recast their entire living space with spectacular results.

“It’s like living in a New York loft,” says Polly Marion. “We wanted our surroundings to be enjoyable for the rest of our lives. Fu-Tung developed our trust. He worked with us. And a whole new life has opened up for us in Davis.”

That’s one end of the concrete spectrum.

Now meet Barry Schuler, 52, former chief executive officer of AOL, whose net wealth in 1999 was estimated by Forbes magazine to be $750 million. Recently, Schuler built a showplace home in a small vineyard on 35 acres in Napa Valley.

The house was designed by Bainbridge architect Jim Cutler, who has worked for Bill and Melinda Gates. But Fu-Tung Cheng had sole custody of the kitchen. The spectacular concrete and stainless-steel kitchen is featured on the cover of “Concrete at Home.”

Schuler calls Cheng “the best architect-designer I have ever worked with. He is extraordinarily talented, with great design language.” And the kitchen? “It’s the absolute center of my house,” he says. “We entertain a lot, so people gather there to watch me cook. I think of it as a piece of sculpture.”

Cheng himself lives much more modestly and jokes that Schuler has a potting shed that’s bigger than his house. Despite his own success, he lives happily in a 1,300- square-foot home in Albany, which he bought 33 years ago for $16,500. At the time, the house was ramshackle; some rooms didn’t have floors.

He fixed it up using salvaged materials and knowhow he acquired by trial and error. It’s worth noting that Cheng is not a licensed architect or even a designer by training. He is a former painter who has a master’s in fine arts from USC.

Nonetheless, the Cheng home, which he shares with his schoolteacher wife, Lila Luk, and their 6-year-old daughter, An-Ya, remains the firm’s most convincing prototype, both innovative and liveable.

Today, Cheng is moving into other realms. He has designed a line of oven hoods for Zephyr. He has a product he markets called Geocrete. He conducts workshops for contractors. And, a blissful retreat, he is part owner of a tea shop called Teance on Solano Avenue in Albany.

But Cheng is not content to be just the reigning King of Countertops. His firm (a staff of nine, including designers and architects) is moving into house design. He has already designed six homes, one of which was applauded in Architectural Record.

Cheng has traveled some distance in his life’s pilgrimage, from a small boy with a rice sack on his back to this designer of acclaimed space.

“Ultimately, I think, when all is said and done, when you have aspired and succeeded to some degree, I think you go to art to find your humanity,” he says. “I want to create a sense of community. I want to do something that wasn’t done before. To create something that brings us a sense of joy.”