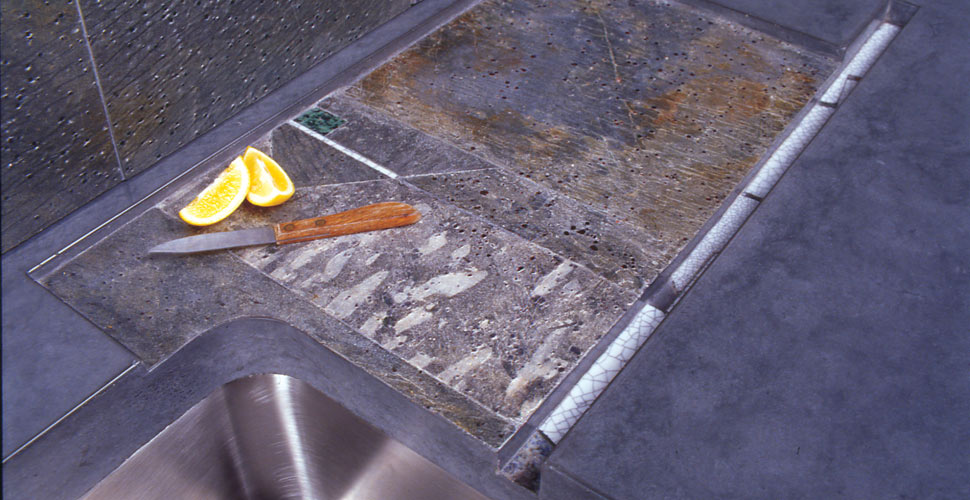 The Press-Enterprise
by Mark Schwartz

When Upland resident Phil Hurley remodeled his home in 2005 he decided his standard, tile kitchen countertop had to go.

Hurley recalled being impressed by the sleek, contemporary look of concrete countertops on display more than a year earlier at an expo.

He wound up at the doorstep of Derek Ellison, owner of Western Floor Decorating in Riverside.

“He was the one doing it the longest,” said Hurley. “I found a lot of guys who want to do decorative concrete but they don’t have the experience.”

Hurley said Ellison’s ability to mold concrete counters at his shop also impressed him. Other contractors often insist on doing the pouring strictly in the home.

Western installed a concrete countertop for $6,000 that proved a perfect fit atop the base cabinets.

Western also installed a concrete floor and a bar. Hurley chose grey throughout for a contemporary look, with accents in cobalt blue.

“I wanted the material to look like concrete,” he said.

Ellison is one of a growing number of Southern California contractors who specialize in residential concrete floors, countertops, sinks, fireplaces and other interior fixtures. Concrete, Ellison says, is becoming the fastest growing design material of choice throughout Southern California.

“Right now I’m doing maybe five a month,” Ellison said. “That’s double what I did the previous year.” Demand is “very hot” in Riverside, the Coachella Valley, Orange County and the Los Angeles area, he said.

“My rule is to never try to convince someone to use concrete,” said Ellison. “They come to me because they’ve already seen it in magazines, books or on the Internet.”

Depending on the “wow factor,” a concrete countertop can cost from $100 to $300 per square foot installed, he said. It’s pricier than other materials commonly employed, including granite. But that higher ticket gives it an exclusive, upscale appeal to homeowners who seek a custom design in their kitchen.

“It’s just so unique and far off the beaten path,” said Hurley.

It can be tinted any color and embedded with a variety of materials such as marble chips allowing people to express their individuality and aesthetic preferences. It also can be coupled with stone, slate, metal and wood in traditional and contemporary home settings.

In August 2004, Consumer Reports ranked concrete at the top of all top-dollar kitchen countertops in “exclusivity” and “customization.”

“All along I’ve tried pushing the envelope on what to do with concrete,” said Fu-Tung Cheng, the Berkeley-based guru whose books and training courses on concrete have revolutionized the industry.

“I’ve emphasized good design to contractors. Without it, all you’ll get is a bunch of sidewalks lifted three feet up onto a box.”

Cheng’s work over the past 20 years has helped change the public perception of concrete from a cold, drab, industrial material to one that is warm, touchable and transformable into anything a homeowner can imagine.

Cracks and Other Downsides

Concrete has some downsides: Being more porous than other materials, it is prone to cracking and scratches from cutting.

“If you’re not a heavy-use gourmet cook concrete would be a practical option,” said Chafin. However, concrete countertops rarely crack when done by those who understand its limits and stress points, said Cheng whose book “Concrete Countertops: Design, Forms and Finishes for the New Kitchen and Bath” has become a bible of the industry.

And if cracks appear, many homeowners accept the flaws as part of concrete’s charm, he said.

Nor is concrete stain-proof. “The Holy Grail of sealers doesn’t exist although those available offer some protection,” Cheng said.

“But I never put concrete on all surfaces in a home. I use it as one element of good design,” he said. For example, stainless steel may be more practical on high spillage surfaces.

What’s more, the quality of custom-formed concrete countertops can vary depending on the skill and experience of the contractor.

All that extra time and craftsmanship is what jacks the costs so high, he said.

“We sell concrete countertops by the piece, never by the square foot like granite and other materials,” Cheng said. “Our products are valued for their craftsmanship, artistry and pedigree — not for their size.”

Despite their higher cost, concrete countertops are within range of many modest budgets as do-it-yourself projects. “It costs very little, yet the homeowner can gain much creatively using concrete as a material,” he said.

Do-it-yourselfers can embed seashells, stones and other personal objects into the surface, as well as stain, color, stamp and polish it any way they choose. Concrete also lends itself to customized stylistic and practical touches such as soap dishes, drain boards and trivets, or stands for hot dishes.

Cheng’s company provides additive mixes — he calls them “secret sauces” — containing metal fibers and water-reducing agents that can help build concrete’s tensile strength and density. Necessary tools like a mixer can be purchased or rented at a hardware store.

“Concrete has given homeowners something besides tile they can do themselves, Cheng said.

Those less handy may be better off leaving the work to professional contractors.

“Concrete is also very heavy,” said Ellison. “It requires a lot of people to move it around … on average four to do an installation.”

A typical job takes an average of two weeks, though a very simple design can be done within 10 days, from template to installation. “But I’ve done them in as little as four days,” Ellison said.