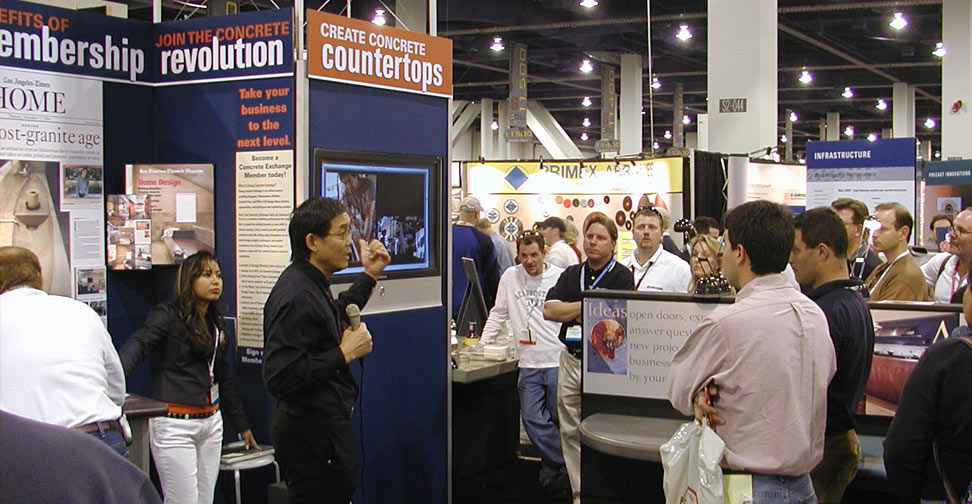 LAS VEGAS, NV, January 2005 – Cheng Concrete Exchange kicked off the year at the World of Concrete 2005 (WOC) with overwhelming booth attendance and genuine interest in concrete counter tops. Dozens of professionals in the concrete industry gathered at Concrete Exchange’s booth throughout the week for a chance to see and touch the smooth, glass-like surfaces of Fu-Tung Cheng’s sculptural concrete countertops.

A neighboring exhibitor, C-Grid, observed first-hand the concrete countertop frenzy, “We enjoyed being next to your booth and seeing the excitement being generated with concrete countertops,” said John Carson from C-Grid (Techfab).

And the Winners Are …

With over a thousand exhibitors in attendance at the WOC, Concrete Exchange made a substantial impression this year for a number of reasons. Major attractions to the booth included speaking events by Cheng, who spoke candidly of his beginnings with concrete and shared his most recent projects with slideshow vignettes. WOC also marked the launch of Cheng’s new instructional DVD video, Concrete Countertops DIY, a step-by-step guide to designing and building countertops.Another big hit this year was Cheng’s sold-out seminar, Beyond Countertops: More Concrete Opportunities Inside the Home. With standing room only in a 500-plus auditorium, the seminar was an exclusive peek into the topic of his second book, Concrete at Home, due out in early March 2005. Cheng’s new book steps outside of the kitchen and delivers ideas on the use of concrete throughout the house, including walls, fireplaces, mantels, hearths, and exterior and interior floors.

The recent debut of Cheng’s instructional DVD video was a popular item at the WOC. Sales of the DVD raised over $10,000, which were donated to various Tsunami Relief charities including Save the Children, Doctors Without Borders, UNICEF and Care USA. Cheng Concrete Exchange appreciates all the contributions received in support of its donation efforts.